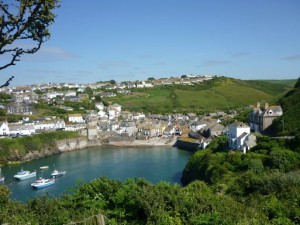 Magical Cornwall – I’ll be back

As a gift to each other’s 50th birthday my best friend Irene and I decided to spend some time in Cornwall. I quickly found Dacey’s Cornish Tours on the Internet. The tour and David’s (Dacey) comments looked exactly what we were looking for and within a few months a group of 13 people from the US, Canada and us two from Switzerland met our host David and his assistant Harry in London on a Sunday afternoon and got to know each other at a pub dinner nearby.

Monday morning we met Tim, our reliable driver for the week. After a few hours on the road we reached our first destination, Port Isaac. Our hotel was on top of a hill and we walked through pastures and cornfields into Port Isaac. It simply took my breath away. Seeing Port Isaac aka Port Wenn of the series “Doc Martin” I had to rub my eyes to make sure I wasn’t dreaming. The place was even more beautiful than on film. The quaint little houses, the narrow, cobbled streets and the breathtaking view out to the sea – I thought it could not get any better. But it did! Walking up another hill we suddenly stumbled across actor John Marquez we all know as Joe Penhale, Doc Martin’s very own police constable. What a chance encounter! He was ever so friendly and willingly posed for photos (check Dacey’s Cornish Tours on Facebook). What a great story to take home! 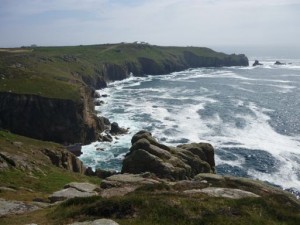 Walking out to St. Michael’s Mount on Tuesday was another highlight. We waited until the tide was in and got back to shore by boat. There and then we had our first (but not last!) Cornish pasty, a must have in Cornwall. St. Ives was our next destination. I had been there before and could not wait to see this lovely place again. David generously treated the group to a delicious 99 Ice Cream – do try! Walking the streets (beware of the seagulls) and later drinking Sangria in the restaurant opposite The Tate overlooking the beach – that’s what a holiday is all about. Walking back I could not help but have a paddle in the very cold water and collect some sea shells.

Wednesday we spent again in St. Ives, wandering around and about, going up to the Island Chapel. Sadly the foggy weather did not offer a view over the beaches – but created a very mysterious and special atmosphere. In the afternoon we drove to Land’s End. I had been there twice before in recent years but never for long – big mistake! David kindly took us on a walk over the hilltops and showed us views and places I had never seen before. The rough coast, the sound of breaking water, the glittering sea – stunning! Later we got the chance for a paddle in the sea at Porthcurno beach. Feeling the warm sand under your feet and stepping into the cool water was simply blissful. Finally, a personal dream came true – seeing a play at the Minack Theatre. The setting and the evening was simply heavenly – sitting there on a rented seat (the best spent pound in Cornwall as David recommended – and he was right), looking out to the sea and the almost full moon, and the farce The Magnificent Three – how much better can it get?!! This was the icing on the cake of a perfect Cornish day.

Thursday morning we were greeted by rain, the only time on this trip. We first visited Truro, Cornwall’s only true city. Arriving at The Lost Gardens of Heligan our driver Tim, a former ranger, offered to take us on a tour around the gardens. And then the place turned into The Lost People of Heligan. We were 11 people following Tim and suddenly at a crossing there were only 5 of us left. We looked around and around but could not see any of the others nor Tim … We walked on towards The Jungle and again suddenly there were only 3 of us left … Was this another chapter in Agatha Christie’s “And then there were none” or were there any flesh-eating plants around? We walked on and on deeper into the jungle – and were finally rescued by David taking us back to the others. Later we were off to The Eden Project a place that looked like something out of Star Wars – a jewel for garden lovers and everybody else. 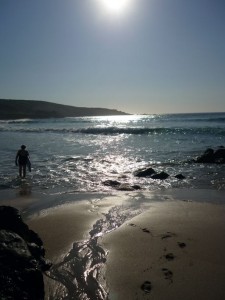 Friday morning Harry proudly presented us his beautiful, picturesque hometown Fowey (pronounced totally differ­ently, ask the locals). We then went on to Lanhydrock, a 17th century home with magnificent gardens. We then sadly had to leave Cornwall and reached Devon’s capital, Exeter, late afternoon where the whole group and our very own Magnificent Three, David, Harry and Tim, met for a final dinner together at our hotel’s exquisite Italian restaurant “The Olive Tree”.

Saturday we had our last English breakfast and we eagerly waited for David to appear as it was his birthday. A little speech was made (thank you, Rod) and a card with some friendly words and new shoe laces for his hikes were presented to David. Hope they come to good use! We sadly had to say goodbye to Harry, David’s reliable assistant, as he was leaving for home. After a few hours we reached London and made our farewells to the whole group and to David and Tim.

I cannot thank David, Harry and Tim enough for giving us the most wonderful time in Cornwall. The main reason that made this trip so memorable and special is not just the places we saw – but their love and pride for Cornwall that they wanted to share with us. They always had a smile on their face and a kind word for everyone. The tour was put together with love and great care. It was the perfect balance of group time and individual time – there was never a MUST but always a CAN. I can recommend Dacey’s Cornish Tours without reservation – if you want a true Cornish experience that is the way to do it. There was only one big mistake – the tour did not last long enough – I could easily have done with another week!! When saying goodbye to Cornwall leaves you with a tear in your eye and an ache in your heart then truly Dacey’s Cornish Tours did everything right. You have infected me with the Cornish virus. I’ll be back! 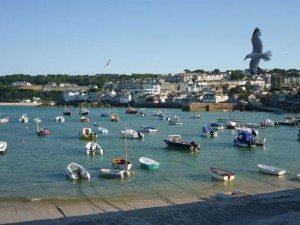