CORN..WALL: pronunciation prior to trip! (emphasis equal on both syllables) It is not cornWall (emphasis on second syllable)

It is CORNwall (emphasis on first syllable and let the “wall” part be slight!)

I have dreamed about this place for a LONG time! I am sure you have seen the beautiful pictures of CORNwall that pop up on your iPad or iPhone;

and, if you LIKE the picture you get lots of pop up pictures! I visited CORNwall quite often…virtually!

I have NOW visited CORNwall! Eight months ago, a friend called and asked would I be interested in booking a group trip…there was one space left on Dacey’s Cornish Tours (the tour group they had discovered on line) for the 3rd week of September. But, when I shared this with my husband. He wanted to go also! We needed to book a separate week. Dacey’s limits the number of folks per trip to 14 for each week’s tour. We immediately went on line, chose our week, made the deposit. We were signed up….and that is how it all began! 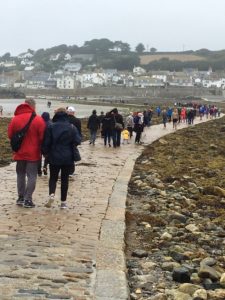 We flew to London, a couple of days before Dacey’s tour began. Monday morning, we joined 12 other folks and were headed for CORNwall, England with Dacey’s Cornish Tours! Our CORNwall week began. At St. Michael’s Mount, we walked across the causeway, climbed all the way up and carefully back down…it was a little misty and the gravel pathway a little wet. We en- joyed a scone & clotted cream & jam in a little cottage type restaurant at the entrance to this site. At Port Issac, we walked down, down, down the long-paved road/path all the way to the Port…in and out those winding streets where barely one car could pass at a time. We decided to take a path leading up the hill/mountain (?) overlooking Port Isaac! There was a bench calling us at the top! We made it. Sat down on that bench and tried to absorb this breathtaking sight all around us. We strolled (that is…we took our time… because you do know for every steep uphill. There is a downhill) back down the path, roamed the streets a bit then back up the paved road/path to our quaint hotel to rest our satisfied bones! Next morning (after a breakfast made to or- der!) we were in the van, winding through the picturesque countryside experi-encing first hand those curvy roads of CORNwall..occasionally pulling over to the side (if there is a side) to let another vehicle pass. You know you have to do that everywhere you go in CORNwall…it’s just the thing you do…so says Jim, our very experienced driver. Thank goodness! We were headed to the Tin Mines. Mine “smokestacks” graced the hilly landscape. These smokestacks al- low air to the miners working down below! We could only imagine! We got out of the bus…strolled across the rugged ground…this place looked just like the scenes of the Poldark series as seen on public TV. What a view…can we just sit here forever? But there was more…so we moved on! At Land’s End… truly Land’s End…we walked the rock and dirt path, across the edge of the cliffs up to the lookout tower overlooking the rock ledges, seeing and hearing the Atlantic Ocean crashing against the rocks! Can it get any better than this? We still had the wonderful coves with their beaches formed in-between the rocky fingers of the landscape to explore. We bared our feet and stuck them in the ever so cold water…we were paddling, of course! On to the outdoor Minack Theater…here we were, sitting on the side of a cliff…ocean water was the backdrop…watching a live production! No words! Then there were the gardens…the castles…so much to do…so much to see! And the little town of Fowey! I so want to go back there and roam those streets…and have an Eng- lish scone, clotted cream and jam!

You can read David’s trip itinerary …every day chocked full of goodies…each one as good as the days before. And then there were the little gems David threw our way daily, we could only respond, “David, how did you find this!” I will offer this piece of advice, when David says, “For those who want to walk with me, meet me at ….” 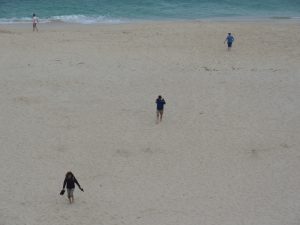 BUT…behind all of this beauty is David! When I first thought there might really be the possibility of going to CORNwall… the trips were filling up fast, I picked up the phone and called this person in charge whose name was David. There was this wonderful voice…. that delightful British accent…that sounded every bit as excited as I was that we just might take this trip…the deal was solidified! I called David a few days later to do the deed…sign on…there was that won- derful voice with the British accent…again, excited for us! We made our de- posit…we were in! As we began to think about our trip…why not add a few days on to the front of our tour. I called David, “Sure, there’s lots of day trips in London from your hotel….he went on to name a few. David called our Lon- don hotel and added days to our already booked reservations! Some days later, another thought began to creep into my head, “Why not add on to the back of the tour and stay in the area of CORNwall a bit longer…to soak it all in! Where should we go…what should we re-see?” I pick up the phone and call David! “St. Ives might be best location…easy to get to the trains in Exeter (our last stop on the trip) back to St. Ives…and from St. Ives back to London.” OK…good…we will do that! Thank you, David, you are my new BEST friend! So, for next three months my mind starts thinking about all the details to pull this off. I hear this British voice saying, “If you have any other questions, do not hesitate to ask!” Those were David’s words every single time. I took him at his word! No matter when I called…within 24hours (usually less time) David and I had spoken! No matter when I sent an email, within 24hours there was an email from David Warner! I must share another BIGGGY! How in the world to you go about getting our train tickets from Exeter back to St. Ives (after the tour ended) and getting the train tickets from St. Ives back to London! I called David! “Should we go ahead and get the tickets.” “Of course, you should.” I go on line…but from where to where? I call David. He gives me the details. I go on line…I put the info in…I go to check out…it will not take my credit card…I try again….it will not take my credit card…I call the credit card company…nothing wrong on their end… they are seeing the charges. I call David. I was on and off the phone with David that afternoon for I know 2 to 3 hours! David was right there…every time! (I know he was praying like I was praying that things would work!) Upon David’s advice, I wait overnight and try to put in the data…start fresh in the morning! “Have a good nights rest”, he says! David says he will sleep well…he hopes I will….knowing all will work out in the morning! Next morning. I put the data in….go to check out…IT WILL NOT take my credit card!!!! I try another credit card…IT WILL NOT take that credit card…I call David! From the sound of my voice David says, “Oh no….OK…tell you what I will do….”. Folks, he went on line…put the data in, charged the tickets on his card which meant he would have to pick up the tickets in London and give them to me when we meet on Sunday! (P.S I did send him a check for tickets, asap!)

But y’all here it this tour director…going way…way beyond the call of duty…never met me or my husband…sticking out his neck…(of course we were BEST BUDDIES by this time)…helping us arrange our trip…and these were tickets for after the Dacey’s tour trip is OVER! David, you are one of a kind! You did so much more than even mentioned here to help us DO CORNwall! Folks, NO…and I mean NO OTHER tour company would do this! David, you ARE Dacey’s Cornish tours. And that is what makes THIS the very special experience that is was! David, your goal has been met…you have two people who want to return to CORNwall…it is in our blood! Your love for this place and your desire for oth- ers to see and love this place called CORNwall is fulfilled over and over again! It is that personal magic touch of yours! Just keep doing what you are doing! There are so many people out there waiting to experience Dacey’s Cornish Tours! Some who do not even know it yet! It was everything and more than I have dreamed! Thank you, David (and Jim).