National Museum of Women in the Arts, Washington, D.C.

Far from the Madding Crowd: Barbara Hepworth in St Ives

On the wall of my living room are two watercolors of St Ives given to me more than fifty years ago by my first serious boyfriend who was a painter. His British Council fellowship in 1957 included a trip to Cornwall and upon return he kept telling me that there is no more beautiful place in the world than St Ives. My boyfriend’s tales, his watercolors, and my interest in the work of Barbara Hepworth resulted in my joining Dacey’s Tour of Cornwall in June 2014. I have not been sorry. Cornwall is beautiful and the tour allowed for two days in St Ives, a place I wish I could stay for ever. Barbara Hepworth must have felt similar enchantment when she arrived there in 1939. She lived in St Ives thirty-five years and created there her most important  works. Her studio and garden opened to the public in 1976 as the Barbara Hepworth Museum and Sculpture Garden. The village of St Ives, proud of the artist, granted her the title of Bard of Cornwall and the Bardic Name Gravyor (sculptor.)  Hepworth’s works can be seen on the winding streets overlooking the harbor and in the Tate Gallery St Ives branch.

As one enters Hepworth’s Museum one sees photographs documenting her life. Born in 1903 in Wakefield, Yorkshire she spent her childhood driving with her father (who was a County Surveyor)  through the picturesque Yorkshire landscape which deeply influenced her work and  her life-long love of nature. She said in one of her poems: …”I am the landscape/I am hollow form…” (1) 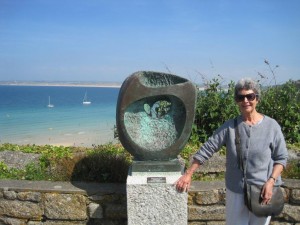 In 1925 she married a sculptor, John Skeaping, with whom she had a son Paul. After Paul ‘s RAF plane crashed over Thailand in 1953 Hepworth carved  Madonna and Child,  and gave it in his memory  to the  Parish Church in St Ives.

The greatest love of her life, however, was an abstract painter Ben Nicholson. She met him in 1931 and had triplets (two girls and a boy) by him in 1934. They married in 1938. At the outset of World War II, in 1939,  the couple moved from London to St Ives with their four small children trying to meet ends and survive.

In 1949 Hepworth bought Trevyn Studio (presently The Barbara Hepworth Museum and Sculpture Garden). Seeing it for the first time she said: “Finding Trevyn Studio was sort of magic…Here was a studio, a yard, a garden  where I could work in an open air and landscape.” The beauty of  St Ives enraptured her. She loved the simplicity of life there and the sense of community which is tangible in the village even today.

Hepworth and Nicholson divorced in 1951. The artist stayed in St Ives  and  lived alone until her tragic death in a studio fire in 1975. Frail and suffering from cancer and arthritis, she was unable to call for help, or perhaps unwilling to live any longer.

Hepworth achieved fame and success during her lifetime, her works are in every major museum in Europe and in the Unites States. She represented United Kingdon in Venice and São Paulo biennials, was granted the title of  Dame of the British Empire by the Queen, and held exhibitions all over the world. Her large bronze, Single Form 1961-64, standing 22 feet high in front of the United Nations headquarter in New York, was created to reflect the nobility of Dag Hammarskjöld, Secretary General of United Nations and close friend of Hepworth. 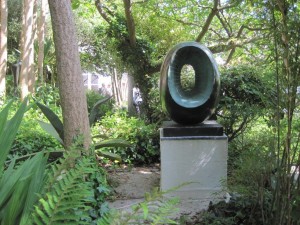 The Hepworth Museum and Sculpture Garden  allows the visitor to see the artist in context of her life. Her former living quarter is presently filled with her smaller works including an early work, Infant 1929,  carved in wood the year her oldest son was born.  Motherhood was an important inspiration in Hepworth’s work. She carved, several versions of Mother and Child from figurative in the late 1920s to more abstract in1934.

The Garden, which she created herself, is magical. It is the best outdoor gallery for her monumental bronzes and limestone sculptures. The works  seem to maintain a lively dialog with trees, bushes, and flowers in bloom.   Pierced with circular apertures, the sculptures allows for multiple views and project mysterious shadows on the ground.

In the garden is also Hepworth’s studio equipped with all her tools as she left  them on a worn-out wooden table or hooked to the wall. I was amazed how many mallets, hammers, and carving knives she used.

Some Hepworth’s sculptures are inspired by the human figure, while other are abstract forms. One senses her pleasure in handling the material, be it stone, metal, or wood. The works project both movement and stasis, strength and vulnerability, balance and fluidity, roundness and angularity. Hepworth wrote: “The forms which have had a special meaning for me since childhood have been the standing form which is the translation of my feeling toward the human being standing in landscape: the two forms (which is the tender relationship of one living thing besides another); and the closed form, such as the oval, spherical or pierced form (sometimes incorporating color) which translates for me the association and meaning of gesture in landscape, in a response of say a mother and child or in the feeling of the embrace of living things, either in nature or in the human spirit.” (2)

Hepworth’s sculptures are an attempt to keep firm footing in the world  which has been often difficult to live in. The feeling of impermanence and loss which have been part of her experience, but also love, motherhood, and friendship found  expression in her work. In addition to almost 600 sculptures, Hepworth  made a series of little known pencil, ink, and chalk  hospital drawings observing surgeons operating on patients. I have seen a selection of these drawings in the Royal Albert Memorial Museum in Exeter during one of the stops of the Dacey’s Tour of Cornwall.

Leaving Hepworth Museum  I found a letter from a child, Anna Cloke, on display in the entrance hall. It says: “Dear Barbara, I did like your sculptures and I really liked the one with hole in it.”