Number 4 of the 5 step program to achieve Dacey’s Cornish tours enlightenment is more of a prerequisite. For most people who take a Dacey’s tour, step 4 has already played a part in bringing us together but for some it needs to be supplemented before departure to that fine faraway Cornish land. 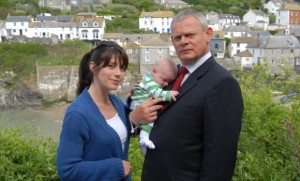 Doc Martin, the TV show made in Port Isaac, Cornwall,  can be seen on most PBS channels in America and is shown in over 35 other countries for good reason. Some would say British TV is at its very best when exported to all four corners of the globe.

So what is Doc Martin? Well, an irritable, impolite doctor from London finds himself running a local surgery in the fictitious town of Portwenn, otherwise known as Port Isaac, also the first stop on Dacey’s Cornish tours. Watching Doc Martin for just ten minutes you will see why it is a “must stop” for us.

Anyway, back to the Doc which is now in Season 6, can you believe it? It seems like only yesterday when the doctor turned up in Porthwenn having to leave London after developing an acute fear of blood, not an ideal phobia to suddenly get when you are a hot shot surgeon. Season 6 has recently been shown in England. In fact, on our tour last September the show was on TV and bizarrely showing  the night we were in Port Isaac. We were all eating dinner then “whoosh” every one left the table in a heartbeat headed for their rooms to catch up with the latest shenanigans of the doctor. It made for a surreal viewing of the show. You felt like someone was going to knock on the door and ask if you could make your way as quickly as you could to the surgery to help!!!

So whilst we are in Port Isaac, we get to see all the sights from the show, in particular the surgery and the school house (even if you are not a fan it is still such a fantastic place to visit). Every time I go to Port Isaac I always keep looking over my shoulder thinking the Doc is going to come running down those very narrow streets telling me in no uncertain terms to “get out of the way you ……..”

For six seasons I have invested myself in the quirky inhabitants of Porthwenn, the Doc and his “will they or won’t they” romance with the school teacher Louisa. Every TV series known to man must have a “will they or won’t they” romance. We have watched with hilarious consequences the exploits of PC Joe Penhale and his pursuit of law and order (he is my favourite character as he reminds me of so many people in Cornwall). We have followed Bert and Al Large trying to seek out their fortune. There are so many other characters that make up this great show but alas we must move on.

So step four of the enlightenment program for those who are already avid viewers of Doc Martin is already accomplished and your enhancement will be complete with your  first sighting of Port Isaac (this is a very special moment) . Those who have not, may I suggest Netflix or this website http://www.docmartinfan.com/  You can watch on-line catch-up on episodes or even purchase a DVD.